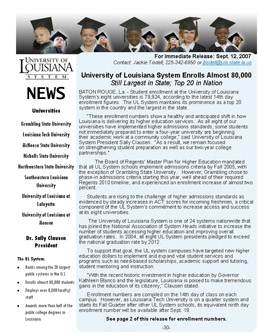 BATON ROUGE, La. – Student enrollment at the University of Louisiana System’s eight universities is 79,934, according to the latest 14th day enrollment figures. The UL System maintains its prominence as a top 20 system in the country and the largest in the state.

“These enrollment numbers show a healthy and anticipated shift in how Louisiana is delivering its higher education services. As all eight of our universities have implemented higher admissions standards, some students not immediately prepared to enter a four-year university are beginning their academic work at a community college,” said University of Louisiana System President Sally Clausen. “As a result, we remain focused on strengthening student preparation as well as our two-year college partnerships.”

The Board of Regents’ Master Plan for Higher Education mandated that all UL System schools implement admissions criteria by Fall 2005, with the exception of Grambling State University. However, Grambling chose to phase-in admissions criteria starting this year, well ahead of their required Regents 2010 timeline, and experienced an enrollment increase of almost two percent.

Students are rising to the challenge of higher admissions standards as evidenced by steady increases in ACT scores for incoming freshmen, a critical component of the UL System’s commitment to increase access and success at its eight universities.

The University of Louisiana System is one of 24 systems nationwide that has joined the National Association of System Heads initiative to increase the number of students accessing higher education and improving overall graduation rates. In 2004, all eight UL System presidents pledged to exceed the national graduation rate by 2012.

To support that goal, the UL system campuses have targeted new higher education dollars to implement and expand vital student services and programs such as need-based scholarships, academic support and tutoring, student mentoring and instruction.

“With the recent historic investment in higher education by Governor Kathleen Blanco and the legislature, Louisiana is poised to make tremendous gains in the education of its citizenry,” Clausen stated.

Enrollment numbers are compiled on the 14th day of class on each campus. However, as Louisiana Tech University is on a quarter system and starts its Fall Quarter after other UL System schools, its equivalent ninth day enrollment number will be available after Sept. 19.