2020 For Our Future Conference Pre-Conference Speaker 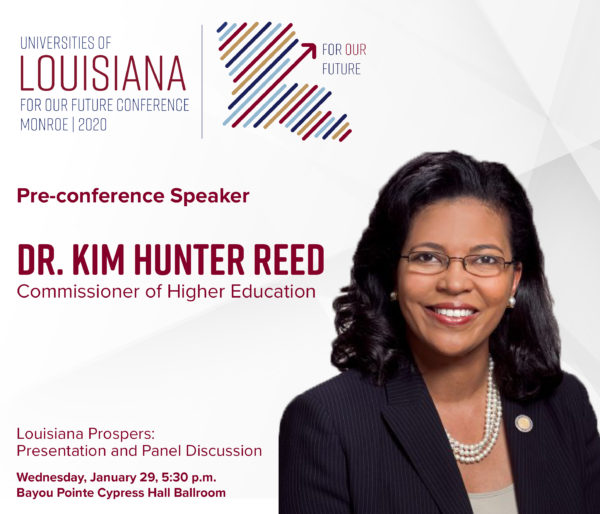 Reed will discuss talent development and the Board of Regents’ Master Plan for Higher Education at her pre-conference presentation. Following Reed’s presentation, she will join a panel made up of university leaders, a policymaker, and a student to discuss the master plan in more detail and how it will impact the state. Join us for a reception directly following these pre-conference events.

Kim Hunter Reed, Ph.D., is Louisiana’s Commissioner of Higher Education, holding the position since April 2018.  She is the only female in the country currently serving as a state higher education leader who has led higher education in more than one state.

Working with the Louisiana Board of Regents and the state’s public and private institutions, Reed leads the state’s talent development efforts through a focus on education, innovation and collaboration, designed to double the number of residents with a postsecondary credential of value by 2030.

Reed has extensive higher education and government experience. She served in President Barack Obama’s administration as deputy undersecretary at the U.S. Department of Education, leading postsecondary diversity and inclusion work, supporting strong student and outcomes-focused policies and aggressive national outreach efforts. She also led the White House Initiative on Historically Black Colleges and Universities. Before serving in the administration, Reed was a principal at HCM Strategists LLC, a public policy and advocacy consulting firm in Washington, D.C.

A Lake Charles native, Reed chaired Louisiana’s higher education transition team in 2015 and served as the State’s policy director. Reed also served as chief of staff and deputy commissioner for public affairs for the Louisiana Board of Regents and executive vice president of the University of Louisiana System.

She has received numerous honors, including LSU Alumna of the Year, Public Administration Institute; Hall of Fame Inductee, LSU Manship School of Mass Communication; and Mom of the Year, Jack and Jill of America, Baton Rouge Chapter. She has been featured in Daughters of Men, a national publication highlighting outstanding African American women and their fathers.