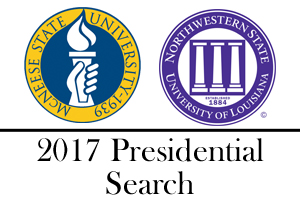 Next steps include search committee meetings at the universities to gather feedback from students, faculty, staff and community members. The search committees will meet at Northwestern on March 9 and at McNeese on March 13.

The System hopes to have new leadership in place at both universities by July 1.

Additional information regarding the McNeese search including the approved timeline and advertisement is available here.

Additional information regarding the Northwestern search including the approved timeline and advertisement is available here.

LEGISLATIVE SESSION UPDATE
Yesterday the Louisiana Legislature agreed on a budget plan that spares higher education from cuts after its nine-day special session.

“We applaud our governor and legislators who developed budget solutions that did not include yet another cut to higher education,” UL System President and CEO Jim Henderson said. “The Universities of Louisiana are a positive return on investment for our state and we will continue to work with our leadership to ensure those returns are realized for Louisiana’s taxpayers.”

The $304 million mid-year deficit will be closed using cuts to state agencies as well as $99 million from the state’s rainy day fund.

The Legislature’s focus will now shift to the April 10 fiscal session which will address the state’s tax policies and negotiate the details of the state’s 2018 budget.

BOARD APPROVES UP TO $5 MILLION IN ENDOWMENTS AND SCHOLARSHIPS
Today the Board of Supervisors for the University of Louisiana System approved $3.24 million in endowments, first generation scholarships and graduate endowed scholarships. If the Board of Regents fully funds its 40 percent match, the total grows to $5.4 million. With the exception of Grambling State University, all of the Universities of Louisiana are positioned to receive funds.

Board Chair’s Business
McNeese: approval to authorize the University President to take necessary actions to remedy a dispute related to an athletic game guarantee.