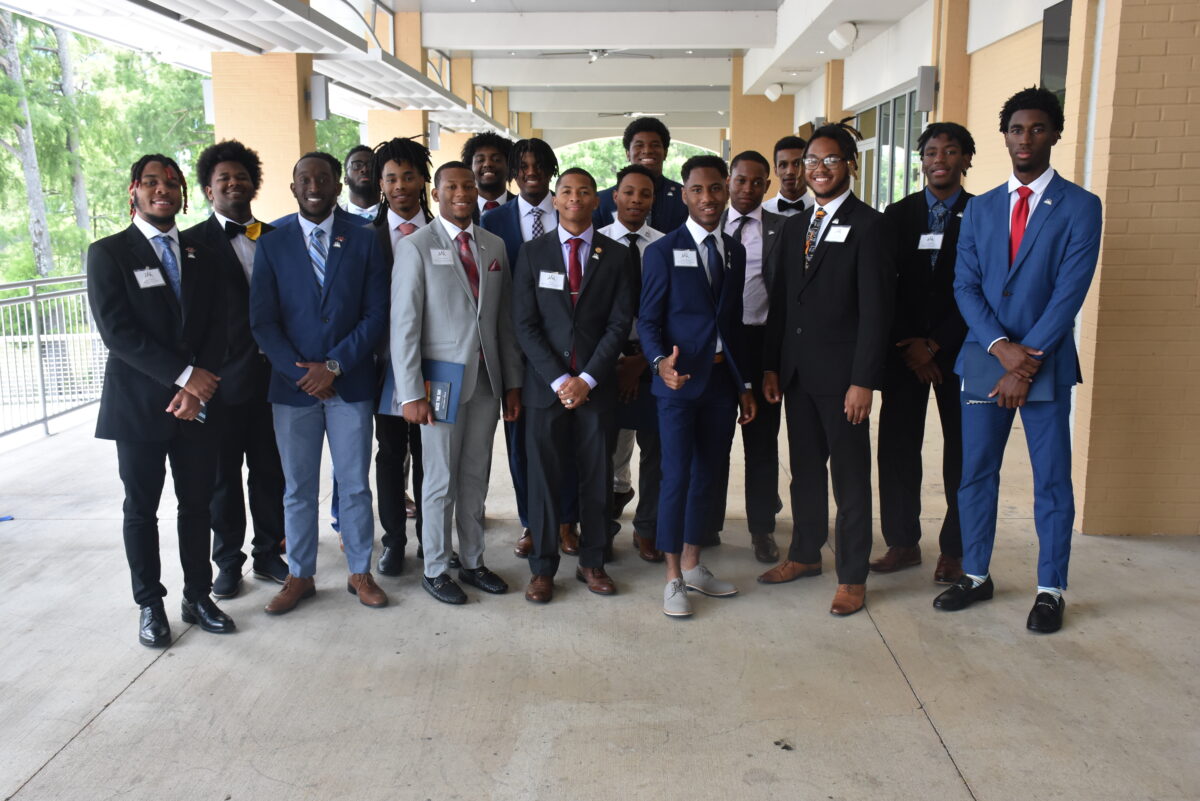 Two students from each of the University of Louisiana System’s nine member institutions were introduced as the second cohort of Reginald F. Lewis Scholars during a pinning ceremony at the University of Louisiana at Monroe as part of the annual Universities of Louisiana Black Male Summit. The Reginald F. Lewis Scholars provides a three-year curated educational experience focused on three key areas—academics, social advancement and community service.

“Before you today stands the second cohort of Reginald F. Lewis Scholars. In reality, you were just introduced to the next generation of leaders in Louisiana and beyond,” UL System President and CEO Jim Henderson said. “These 18 young men join the first cohort ready to develop into better students, more engaged community members, and culturally aware citizens equipped for life and career success.”

“The investment from our community partners, not only financially but through mentoring and internship opportunities, has reaffirmed the need for the Reginald F. Lewis Scholars Program,” UL System VP for Advancement Claire Norris said. “We’ve seen significant growth in just the first year making our hopes even higher than we originally dreamed for these Scholars.”

The newest Scholars were surprised by a video message from Loida Lewis, the widow of the program’s namesake Reginald F. Lewis, who encouraged the Scholars and shared qualities of her late husband the Scholars should emulate such as perseverance and determination.

Eighteen rising sophomores are chosen for the program based on academic merit, financial need and demonstrated leadership skills. The Reginald F. Lewis Scholars experience is tri-fold. In addition to a full tuition scholarship, cohorts will participate in the community experience which includes a partnership with the Universities of Louisiana Management & Leadership Institute and a service learning project; the social experience which includes an annual focused retreat and academic, social and professional mentorship from business, community and university leaders; and the academic experience which includes research projects and a study abroad opportunity in their junior year. Cohort one is traveling to France in April 2023. The Reginald F. Lewis Scholars Program is at no cost to the student participant and made possible through generous support from individuals and community partners.

In addition to the new Scholars, outstanding members from the Universities of Louisiana community including a Scholar from cohort one were recognized during the Summit.

Click here to learn more about the Reginald F. Lewis Scholars including ways to financially partner with the program.

Reginald F. Lewis was one of the wealthiest black men during the 1980s. Mr. Lewis was the first black man to build a billion-dollar empire, and the first African American to close an overseas leveraged buyout deal. His commitment to diversity, equity and inclusion, particularly for African American youth and young black males, is the inspiration for the Reginald F. Lewis Scholars.