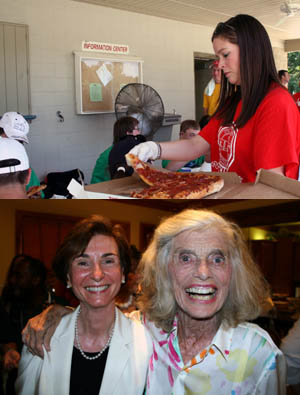 Members of the University of Louisiana System donned t-shirts and jeans to lend a hand at Camp Shriver, a Special Olympics initiative begun by Eunice Shriver that offers a place for those with intellectual disabilities to learn and improve sports skills, build friendships and have fun.

Working during their lunch and after-hours, UL System staff purchased and served meals to Special Olympic athletes. They also raised funds for this important event.

“It’s important that we practice what we preach,” said UL System President Sally Clausen, “as we are expecting our students to be more civically engaged.”

Service is not new at the University of Louisiana System. Working in conjunction with its Student Government Association (SGA) presidents, Extreme Spring Break was initiated this past April. Over 100 UL System students constructed two homes and several storage facilities in hurricane-ravaged areas of Louisiana, in partnership with Habitat for Humanity.

“It was important for us to help our fellow Louisianans,” according to Mallory Wall, former SGA President at McNeese State University and Extreme Spring Break brainchild. “The experience reinforced for all the power and satisfaction there is in giving.”

“I’m excited to see an incentive that will help students give back to their communities,” said Mike Woods, University of Louisiana System Board Member, “because that’s what it’s all about.”